I Choose You — Middle Kingdom — Eyes On Me

Haku. Too kind. That was what he liked to hear and his heart warmed at the effusive praise. The thing was, as the son of an affluent family, he couldn't help feeling as if the entire world watched him and not many of them with happiness. Haku enjoyed bringing happiness to people. Genuine happiness. The kind that came from a family suffering through hardship suddenly getting the food and shelter they so desperately needed. And all the while, people like his family looked down their noses at them from their ivory towers. It burned into Haku until he couldn't take it another moment longer and he left.

What he did now, it had a purpose. What he did before--he was little more than a mascot for the family.

So he grinned to himself as he looked down at the smorgasbord before them, knowing that whatever they didn't eat would go to somebody who needed it; he would never throw out what he didn't eat.

Finally, a name to go with the face. And a job, too! After taking a few quick bites, Haku looked up at the advertisement that Gao so proudly showed him. Swallowing, Haku reached out to take a closer look at it. The fish depicted on the advertisement looked beautiful. Not the kind to eat, so he thought maybe Gao wasn't asking if he wanted to eat them. (He did like eating fish, but in general, they weren't this pretty.)

"I do, actually," he said, and he wasn't just talking about eating them. He remembered a pond they had at his family home, teeming with beautiful fish like this. He used to go there to sulk or be alone. Just sitting on the edge, legs crossed, chin in hands, watching them move as if in a trance.

"Too bad I don't have anywhere to keep 'em or I might be a customer," he lamented. He gave the advertisement back, but his mind was turning over ideas. Ways to help Gao that didn't involve buying fish that would have no home.

"Hey," he said, suddenly spurred on by their new friendship--as he saw it. "How about I help you find your Masashi?" 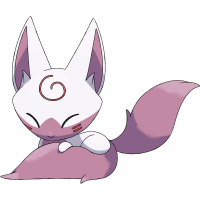 Eyes still locked toward Haku, Gao brought his hand to his mouth, catching the dumpling in his grip in his teeth. It was a practiced bite, just barely small enough to pass for "socially acceptable." He failed to notice, however, that he'd managed a few crumbs to cling to the corner of his lips in the process, too interested in the figure across from him to pay proper mind to his manners. He was all too ready to go on about his prized fish, the possibility of a sale spurring his excitement, but as Haku revealed he'd have no place to keep the creatures, he could only grin. They had something in common.

He'd have taken a moment to assure him, if he weren't so busy stuffing his face with the latter portion of the dumpling captured within his fist. Where did the rest of it go? His absent eating had whittled it down to near nothing in what seemed only an instant to him, and just like that, his hand was roaming off to lay claim to another. Gaze dropped down to the flyer being handed back to him, he accept it into his grasp with an understanding nod, teeth still working at the bite in his mouth as he listened on. The colors on the parchment seemed to mesmerize him for a moment, but Haku's voice called him back, focus lifting to center his full attention toward the man.

His eyes widened a fraction at the offer, the grind of his jaw going still.

There was hesitation in the way his gaze flicked between Haku's eyes, color setting to creep back into his features as he slowly remembered the work of his teeth. Swallowing his bite, his fingers failed to reach for another helping, his gaze fixing itself off to one side rather than hold their watch toward Haku's stare, purposefully avoiding the boxed ring still waiting lonely amongst the plates crowding the table.

"I dunno..." he trailed off, perhaps a bit uncertain of getting his hopes up again.

With a pause, Gao cinched his brows, managing to hold onto some trace of his smile as he lift an uneasy gaze toward Haku.

"You really think you could help me?"

Haku couldn't gauge whether or not Gao was okay with his offer or not. At least, not at first. The way he seemed to slow down, mulling it over... Was he in shock over the offer? Haku felt like he should possibly explain himself; how he was a part of the Wolf Warriors, how he was there to help people. Sure, they mostly stole from rich merchants and divided the wealth out to the needy but there was no reason not to help a person in need of something other than wealth. Like help searching for a long lost lover. It was kinda romantic and Haku was a bit of a sucker for that.

"Sure. I have connections," he said, not in a braggart way, either. Just simple truth. "And if he exists, he has to be out there somewhere. Maybe it'll be easier for you to find him if you have more eyes on the lookout."

His grin softened into an encouraging smile. Why not? Finding a missing person could be tricky business and sure, he shouldn't get Gao's hopes up too high when he had no idea where to even start looking for Masashi. But all he needed to know was more information. Taking another quick bite and swallowing, he leaned forward as he drew a bowl of soup closer.

"Can you tell me more about him?"